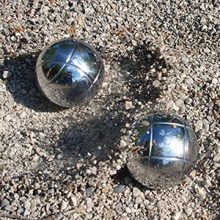 The activity of longbowl on the road consists of throwing a flask into a road (with any type of road surface).
The game consists of throwing a flask into the road so that it can travel the longest possible distance.
Competitions take place on all kinds of roads, generally on asphalt.
The flask used for throwing is made of iron in the European Championships but, in the national context, flasks made of synthetic and coloured material are also used. The competition normally takes place with a set number of throws (usually 10) from a predetermined point on the road. All the athletes make the first throw from the same starting point, the second from the arrival point of the flask and so on. The winner is the athlete who covers the longest distance on the road with the predetermined number of throws.
The competition can also be held in teams. In this case, each team consists of a predetermined number of athletes and each has the above-mentioned goal.
Each team must consist of a predetermined number of players. The two teams start the tournament from the same starting point and the players perform the throws alternately. After the first throw, the team throws the second throw from the point of arrival of the best throw of its players and so the third throw. The team wins the three-throw competition. The team that wins five throws wins the tournament.